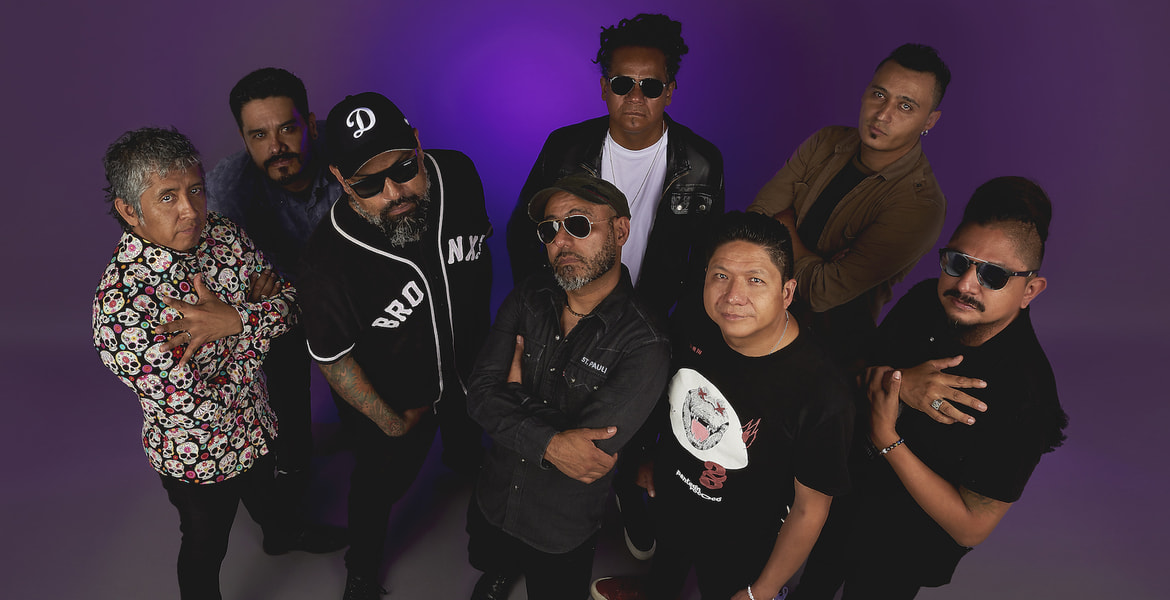 Beloved, socially, conscious Mexican band with music evolving through multiple genres over a 27 year career path. Recognized worldwide as the premiere force a of Mexican irreverent rock, ska, punk infused with lyrical pulse of the nation since 1995. Once predominantly speaking to the massive population in the lower end of the social and economic spectrum, the music with its accompanying narrative now penetrates through virtually all classes. Panteon Rococo, with eight individually talented songwriters, musicians and producers, have been independently creating their own unique style of music for their entire career. Catalog of recordings includes eight studio and two live albums. They have significant audiences int North, Central, South America and much of Europe, particularly Germany where they have performed hundreds of concerts.

While their main market is their home territory of Mexico where they routinely fill stadiums of up to 65,000, they are enjoying ever-increasing audiences internationally, particularly in The US and Europe. They have headlined festivals alongside bands such as Radiohead, Metallica, Depeche mode, REM, Residente, Molotov, Zoe, Ater ciopelados, Los Amigos Invisibles, Jamiroquai, Café Tacvba and Bunbury. Artistic collaborations include: Vicentico (Fabulosos Cadillacs), Natalia Lafourcade, Lila Downs, Rubén Albarrán (Café Tacvba), Dub Inc, Celso Piña, Flavio Cianciarulo, La Sonora Dinamita, Auténticos Decadentes, Juan Gabriel, Oscar Chávez, María Barracuda, Ely Guerra, among others. The 2019 single release, El Último Ska, achieved #1 in Mexico on plataforms such as Spotify and YouTube. The 2019 the album release, Infiernos, had #1 sales debuts both physically and on digital platforms with the singles Tonantzin, El Último Ska and Infiernos. In 2019 the band toured in 16 cities in the United States and in 13 cities in Europe. In 2020 they released Si una vez, cover of Selena’s iconic hit and Sobreviviré (Gloria Gaynor’s I will survive), both produced by the Grammywinning producer KC Porter. In November 2021 they released Ofrenda, their tenth studio album with 10 reversioned songs by great composers such as Juan Gabriel, Armando Man-zanero, Jarabe de Palo and Oscar Chávez, among others. Vivir así es morir de amor, Hasta que te conocí y Cuando estoy contigo are some of the songs on this album. The concept of Ofrenda, tells in seven videos the story of families waiting for the return of their relatives due to forced disappearances, and where the music and interpretation of Panteón Rococó merge to give them visibility. In December 2021 they closed the year celebrating the band‘s 25th anniversary with 3 concerts at the Foro Sol in Mexico City, two of them sold out with more than 150,000 tickets sold and with great guests such as Meme and Rubén Albarrán from Café Tacvba, Mon Laferte, Margarita, Lila Downs, Leo de Lozanne, Santa Fe Klan and Armando Palomas, among others. In 2022 they began their Ofrenda tour to continue celebrating their 27-year career and present their new songs in solo concerts and international festivals in Mexico, the United States, Germany and Colombia, among others.