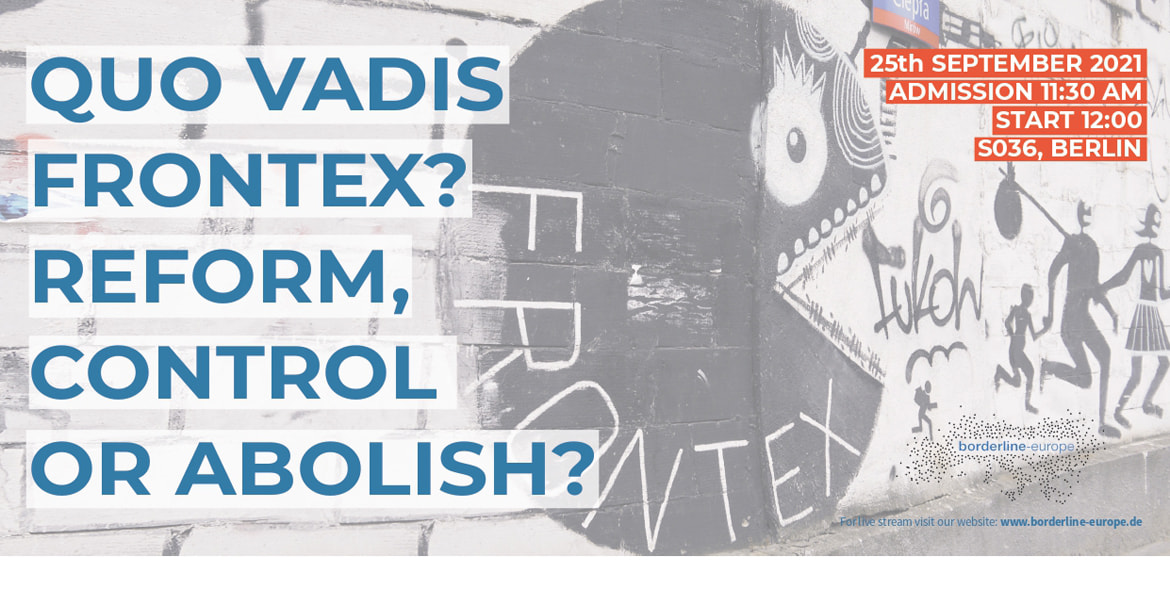 ADMISSION ONLY WITH A CERTIFICATE OF A NEGATIVE COVID-19 RAPID TEST (NOT OLDER THAN 24 HOURS). DOUBLE VACCINATED AND RECOVERED PERSONS DO NOT NEED A NEGATIVE TEST IF THEY CAN PROVE IT. OUTSIDE OF YOUR OWN SEAT YOU HAVE TO WERA A MEDICAL OR FFP2 MASK.

EXPLANATION OF TICKETS:
IF YOU WANT TO SIT TOGETHER AS A COUPLE OR IN A GROUP, PLEASE BUY A 2-SEAT OR 3-SEAT TICKET. THE SINGLE SEATS ARE FOR PEOPLE WHO WANT TO COME ALONE. YOU WILL BE ASKED FOR CONTACT INFORMATION FOR ALL TICKETS AFTER YOU PURCHASE THEM. IF YOU DON'T KNOW THE CONTACT DETAILS FOR YOUR COMPANIONS, NO PROBLEM, WRITE IN PLACEHOLDERS, THIS CAN BE CHANGED AFTERWARDS.

Criticism of practices that violate human rights has accompanied the "European Border and Coast Guard Agency", or "Frontex" - since its founding in 2004.

From its involvement in illegal pushbacks to its cooperation with the so called "Libyan Coast Guard": in addition to the reports of those affected and eyewitnesses, extensive video material provides evidence of these practices. Since last year, the accusations have been intensifying based on research by various media outlets.

Following this substantial evidence, the EU Parliament set up a special committee, the Frontex Scrutiny Group, which investigated the human rights violations and presented a final report this summer. According to the report, Frontex is aware of illegal activities in the Mediterranean, but does not intervene. Moreover, the report states that agency head Fabrice Leggeri has removed incriminating material. With unparalleled cynicism, the agency now comments that the MEPs could not prove Frontex had engaged in illegal activities. However, this was not the task of the committee.

The lack of will to investigate or admit wrongdoing, or to ensure basic human rights is part of the agency's modus operandi. Frontex puts the protection of borders above the protection of people who are in danger.

Alongside the EU Parliament, investigations of Frontex are carried out by human rights representatives, the Greek Ombudsman, the European Ombudswoman and the EU Anti-Fraud Office. Several lawsuits are pending before European courts. Nevertheless, Leggeri always manages to wriggle out of the accusations, no sanctions have been imposed so far and the agency continues to expand.

According to its regulation, Frontex is independent, its director may not take instructions from the member states or the Commission. This has created a legal vacuum for the agency. At the same time, the power of the Frontex director continues to grow: planes and drones for aerial surveillance under its own control, a fleet of vehicles with surveillance technology, a new armed border force under Leggeri's command.

Why is it so difficult to indict and prosecute the illegal activities of the agency? To whom is Frontex actually accountable? What are Leggeri's new narratives and how can we debunk them?

borderline-europe – Human rights without borders e.V. invites you for a two-part event in Berlin on 25th September 2021. We will discuss with activists and experts who are confronted with the practices of Frontex at various EU external borders and in different fields of work. Together we then want to show possibilities of civil resistance.

Panel 1: Current border practices of Frontex
Situation reports from the EU external borders, on the new mandate and technical equipment of the agency

Panel 2: Tactics of civil resistance against Frontex
On the interlocking of political, legal, and practical struggles against the agency´s activities and its new narratives